I’ve been wanting to write a recap of The Arnold Weightlifting Classic from my perspective but have been delayed for the past few weeks, namely due to travel and not having a vehicle such as this website available for me to publish my thoughts.  Now that things are up and running I figure I better get to it before I forget.

Let me start by saying this was my first time at The Arnold.  Columbus seemed like an interesting city from what little I saw of it traveling from hotel to convention center and back.  The event itself is a massive production with hundreds of thousands of people involved in this sport or that sport or just there to get free supplements.  I personally had zero interest in being in tight quarters with a multitude of spray tanned people trying to take a peek at every event.  I spent all three days with my team either in the warmup room, training room, or next to the platform.  This was entirely fine with me because I love weightlifting an unhealthy amount.

I was able to help some of my teammates out in warmups by counting cards, timing attempts, and loading the bar.  I learned, without a shadow of doubt, that I do not want to ever leave weightlifting in any capacity.  The action is addicting and when I can’t lift any more coaching will have to feed that addiction.

In Becca’s session was Spanish weightlifting superstar Lidia Valentin.  I didn’t really spend anytime with Lidia other than grabbing a quick photo op, but I have these things to say: 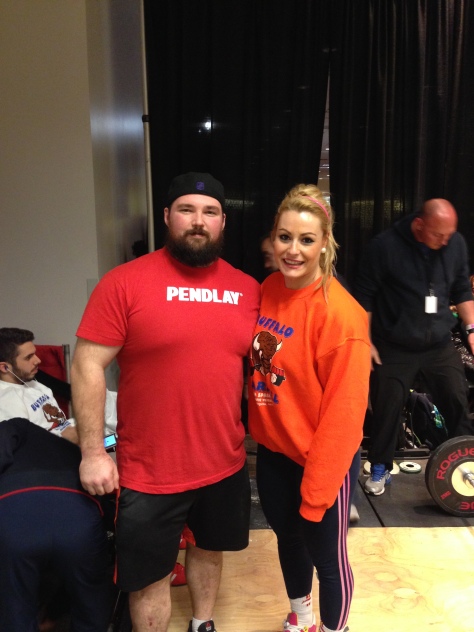 This was also my first time seeing Kendrick Farris lift in person.  The same speed I saw in Lidia’s lifts were apparent in his attempts,  That guy is not only crazy strong, but incredibly quick around a bar.  Again, I lift next to very talented people everyday and this even hosted world class lifters from Poland and some of America’s best.  That’s why these two standing out is all the more impressive to me.

The Team’s performance overall was sort of a mixed bag.  We were coming off a very strong performance at the American Open and were in a transitional phase.  Most of us went home to see family for the holidays and stayed there for some time.  This left really only 8 weeks to train together, get back in shape, and prepare for The Arnold.  I think this showed: some of us PRed, some of us didn’t.  I think we’re all excited to be back in training and having the opportunity to address our respective weaknesses and have a very dominant performance at Nationals.

What I took away from the meet:

For those who haven’t seen it, I’ve attached the video our Videographer Josh made of all our lifts.  Please subscribe to our YouTube Channel if you don’t already as Josh will be churning out more content there and elsewhere.